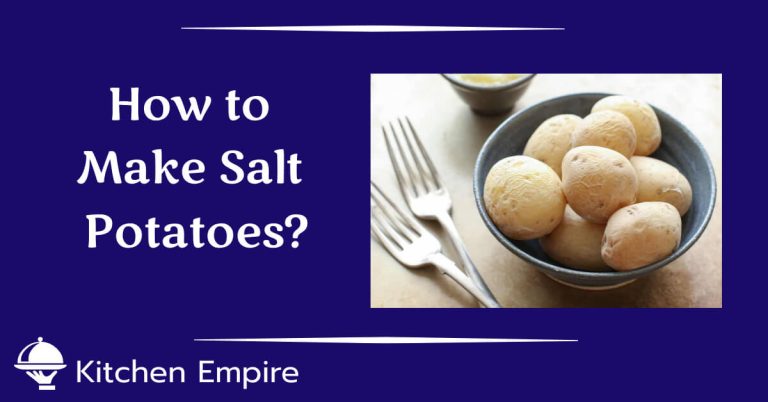 Syracuse, New York, also known as The Salt City, is famous for salt potatoes. Salt potatoes were invented in the 1800s by local salt mine workers who used brine to boil small potatoes for a simple and inexpensive lunch. It is an incredibly easy and delicious side dish that is still well-liked in Central New York today.

Enjoy your mini potatoes in this delicious and easy recipe. In salt potatoes, the whole potato is boiled whole with plenty of salt for thick, creamy insides and a salty, crusty exterior. Butter and herbs are typically served with salt potatoes.

Upstate New Yorkers love salt potatoes, but they should be enjoyed by a wider audience. It is a great side dish for most meals because of its delicious taste.

How to Make Salt Potatoes? 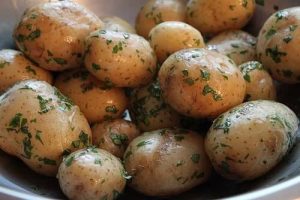 Put the potatoes aside after they have been washed. Stir salt into boiling water until it doesn’t dissolve any more and settles at the bottom. The potatoes should be placed in a pot and brought to a boil, then reduced to a simmer and left for 15 minutes until tender. Once tender, drain the potatoes.

How Long to Boil?

Potatoes should be boiled for a certain amount of time depending on their size. Small, uniform potatoes yield best results. The best potatoes are small golden ones. You can also use smaller red potatoes.

A smaller potato generally takes 15-20 minutes to boil. The smaller ones, if you have more than one size, should be checked at 15 minutes; remove them and keep warm.

In a pot of boiling salt water, cook the larger potatoes and remove when they are tender. When potatoes are overcooked, they split, infiltrating salt into their flesh.

How Much Salt Is Needed?

Salty crust forms on the thin potato skin due to the high concentration of salt. Whenever the potatoes are boiling, a barrier prevents them from becoming waterlogged.

As a result of the saltiness in the brine, the water boils more quickly. Salted potatoes are known for their ultra-creamy interior since potato starches break down more.

Salt four pounds of potatoes with one pound of salt. For every six cups of water, put one cup of salt on the potatoes.

When you boil the potatoes, you can use one-third to one-half cup of salt (or between one and two tablespoons of salt per cup of water used). Try varying the amount. The saltier the potato, the saltier the crust.

When making salt potatoes, you must use whole potatoes. Mini potatoes work very well as well. You can use larger potatoes, as long as they’re boiled whole. Fork-tender potatoes will obviously take a bit longer to boil.

FAQs About How to Make Salt Potatoes

1. When you boil potatoes, what do you do?

Whatever you choose to do with the peel, you’ll have to cut the potatoes into chunks before boiling them, otherwise they won’t cook as quickly. For the best taste, salt the water before cooking potatoes as potatoes soak up a lot of flavor.

2. Why do we add salt to boiling water for potatoes to cook?

In addition to seasoning the water, salting it facilitates the boiling of the potato at a higher temperature. Consequently, the potatoes’ starch is cooked more thoroughly, which results “in a creamier mashed potato,” says The Heritage’s Chef, Sieger Bayer.

3. A salt potato bag contains how many potatoes?

Potatoes, white and small, with salt. Potatoes weigh 4.5 pounds and salt weighs 12 oz according to the bag. About half of the potatoes are cooked for each of us at a time. You should cook the potatoes quickly because they will sprout if they are left sitting for more than a few weeks.

4. Saltwater is suitable for growing potatoes?

The feasibility of growing crops on seawater has been demonstrated on demonstration farms. A breakthrough in food security has been reported by the Dutch government, as specific varieties of potatoes, carrots, red onions, white cabbage, and broccoli seem to thrive if the water is salted.

5. Is it possible to mash potatoes with the best potatoes?

Potatoes from the Yukon Gold variety make the best mashed potatoes. They are great to roast and we agree just as strongly for any mashed potatoes you require, whether you have a turkey or not. These guys are great! It has the most uniform and dense flesh of any potato variety.